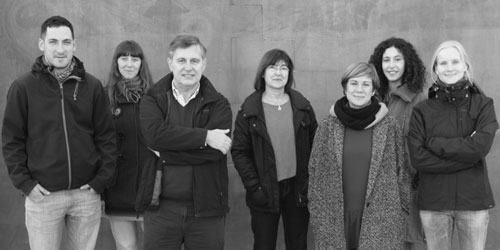 1. Structure and function of bacterial proteins that modulate virulence expression

Protein–protein and protein–DNA interactions play key roles in the ability of virulent bacteria to adapt to the host environment and cause disease. A group of proteins is currently the focus of our research: nucleoid-associated proteins (NAPs) that contribute to DNA architecture and modulate gene expression. We are interested in unravelling the role played by two of these proteins – Hha and H-NS – in the regulation of virulence and of plasmid transfer. Escherichia coli pathotypes such as enteroaggregative E. coli are the subject of our research. Owing to their key modulatory functions, these proteins are interesting targets to combat bacterial infections. 2. Bacterial plasmids and their role in transmission of multidrug resistance markers A main concern with bacterial infections is the selection of isolates that are resistant to several antimicrobial drugs. The transmission of the ability of bacterial cells of simultaneously resist several antimicrobial drugs is accomplished, in many instances, by plasmids. These genetic elements can be transmitted from one cell to another, and modify the phenotype of the recipient cell. We have recently shown that multidrug resistance plasmids in Salmonella require specific plasmid proteins to be stably maintained in this microorganism. These proteins could be considered as targets to combat multidrug resistance. 3. Application of nanotools of bacterial biotechnology

3.1. Dielectrophoresis. We have previously shown that dielectrophoresis can be a valuable tool for bacterial cell sorting and characterization. We are currently using different chip designs (2D and 3D carbon electrodes) to: a) study the effect of electric fields on bacterial cell physiology; b) combine DEP with other molecular protocols for detection and identification of different types of cells. Recent results have shown that DEP chips can be used to increase PCR detection of yeast cells. 3.2. Atomic force microscopy (AFM). Conventional AFM approaches have been shown to be powerful techniques for characterizing both biomaterials and biomolecules. In a joint project with the Nanoscale Bioelectrical Characterization group (page 76), we intend to use electrical- AFM to characterize the bacterial cell envelope. We also plan to use this approach to analyze the structural and physiological properties of bacterial living cells.

Two groups working together at IBEC demonstrate the potential of electrical studies of single bacterial cells in a paper published in ACS Nano. Gabriel Gomila’s Nanoscale Bioelectrical Characterization group and that of Antonio Juárez, Microbial Biotechnology and Host-pathogen Interaction, combined their expertise on microscopic electrical measurements and bacteria respectively to come up with a way to study the response to external electrical fields of just a single bacterial cell.

A researcher’s paper published in the journal Environmental Microbiology is just one step in the right direction to tackle a major public health issue that he and other experts say could soon be devastating.

Continuing the fight against cystic fibrosis

IBEC Senior Researcher Eduard Torrents participated in a conference to mark the National Day for Cystic Fibrosis last Wednesday 25 April. This event, which took place at the Spanish Society of Pneumology and Thoracic Surgery (SEPAR), also included the official presentation of funds from the Associació Catalana de Fibrosis Quística (Catalan Association of Cystic Fibrosis) to research groups specializing in the disease.

An IBEC group has embarked on a technology transfer venture together with two biopharmaceutical companies. Antonio Juárez’s Microbial Technology and Host-Pathogen Interaction lab has formed a consortium with CZV Veterinaria, a leader in the manufacture of veterinary products based in Porriño, Galicia, and Valls Companys’ pharmaceutical arm MEVET in Lleida. Their two-year project aims to obtain strains of Salmonella with weakened virulence, which can then be used to develop a vaccine to reduce the incidence of the infection in poultry farms. Salmonella, a leading cause of food poisoning, is zoonotic, able to spread to man through contaminated animal food products.

We may be several steps closer to understanding one of the major pathologies that affects sufferers of cystic fibrosis, thanks to Senior researcher Eduard Torrents of IBEC’s Microbial biotechnology and host-pathogen interaction group

Eduard Torrents, senior researcher in IBEC’s Microbial Biotechnology and Host-pathogen Interaction group, has been announced as a recipient of the 2010 Pablo Motos award from the Federación Española de Fibrosis Quística (Spanish Association of Cystic Fibrosis) this week.

This week IBEC will be hosting the 8th meeting of the Molecular Microbiology group of the Sociedad Española de Microbiología (SEM). The congress will offer the chance for participants to learn about noteworthy advances in the field and to discuss the particular trends and challenges in this area.

Researchers at IBEC, IRB Barcelona and the UB identify the strategy used by enterobacteria to acquire resistance and pathogenicity.

The Cystic Fibrosis Association of Catalonia (Asociación Catalana de Fibrosis Quística) provides active support to the research conducted by Doctor Eduard Torrents, a member of IBEC´s Microbial Biotechnology and Host-Pathogen Interaction Group, into the enzyme that promotes the growth of the bacteria linked to this disease.