The most recent World Economic Forum Global Risks reports have listed antimicrobial resistance (AMR) as one of the greatest economical and societal risks threats to human health. The spread of AMR bacteria could dramatically set back modern medicine to the dark age of the pre-antibiotic era; achievements in modern medicine, such as the increased safety of childbirth, caesarean sections, treatment of preterm babies, major or even minor surgery, treatment of pneumonia, organ transplantation and cancer chemotherapy, which we today take for granted, would not be possible without access to effective treatment for bacterial infections.

In addition to increased resistance to existing agents, there is a lack of new antibiotics in development, according to a study by the European Medicines Agency. Within just a few years, we might be faced with dire setbacks, medically, socially, and economically, unless real global coordinated actions are immediately taken. The projection of 10 million deaths a year by 2050 is greater than the current annual death toll from cancer.

“During the course of infection, bacteria need to multiply inside the body, and they require active DNA synthesis to multiply,” says Eduard Torrents, who heads the Bacterial Infections: Antimicrobial Therapies group at IBEC. “By targeting the key enzyme that allows this to happen, we can inhibit the growth of various types of undesirable and disease-causing bacteria.” 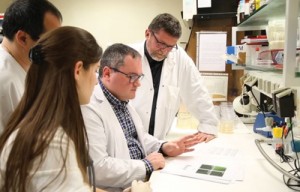 The molecule, known as M-HA, works as a ‘radical scavenger’ compound to inhibit ribonucleotide reductase, an essential enzyme in DNA replication and repair. It also demonstrates low toxicity in eukaryotic cells, which heralds a great improvement on existing RNR-inhibiting drugs, which are mostly used against cancer or viruses and are too toxic to be used as antibacterials.

“It’s crucial that we find new antibacterials that function in a new way, like this one, in order to replace the existing antibiotics that are being rendered useless by bacterical resistance,” says Eduard. “These new drug candidates should also work in a way which will not allow such a level of resistance to build up all over again.”

The researchers tested M-HA and revealed its capacity to inhibit the growth of undesirables such as Pseudomonas and Mycobacterium bacterial pathogens, including Staphylococcus aureus, S.sanguinis and S.mutans, Mycobacterium, P. aeruginosa and B. cenocepacia.

“During 2014, the WHO, Prime Minister David Cameron, President Obama and the World Economic Forum made AMR the focus of highly visible reports and actions, recognizing the global nature of the crisis and calling for local and international leadership and co-ordinated actions to tackle it,” says Dr. Joan Gavaldà of VHIR’s Infectious Diseases research group. “It’s starting to be acknowledged that there’s an crucial need for funding for research relevant to developing new antibiotics and alternatives for treating AMR, as well as increasing economic incentives for developing urgently needed antibiotics and to preserve antibiotic effectiveness. New antimicrobials with new mechanisms of action against gram-negative bacteria, like ours, are urgently needed in order to preserve medicine as we know it.”

IBEC in the Media: There was coverage of this story in Gaceta Médica on 23 March and in Diario de Terrassa on 7 April.