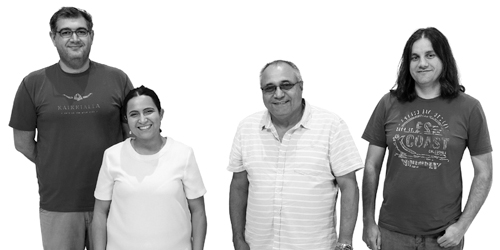 We are interested in cell–biomaterials interaction, and more specifically, on the dynamic formation of the provisional extracellular matrix (ECM) – the thin protein layer that cells recognize, produce, and remodel at the materials interface.

We aim to learn how this process affects the biocompatibility of materials, and if it can be controlled by engineering the surface properties of materials. For this purpose, we perform systematic studies in the following directions:

Biomaterials surface-driven assembly of ECM proteins at the nanoscale
Upon adsorption at material interfaces, proteins may assemble spontaneously and this interaction has significant consequences for their biological response. Recently we have employed distinct silane-inspired chemistries and polymer compositions to create model substrates with tailored densities of -OH, -COOH, -NH2 and -CH3 groups, thus varying the chemistry, charge and hydrophilic/ hydrophobic balance. In a series of communications combining AFM and other nanoindentation techniques, we have described a novel phenomenon of substratum-driven protein assembly depicting the fate of various matrix proteins such as fibronectin, collagen IV, vitronectin and fibrinogen at the above model biomaterials interfaces.

Specifically, we show that by varying the density of chemical functions one can tailor both the assembly and degradation of proteins. Following those findings we aim to control ECM remodelling by engineering specific material properties. Understanding the behavior of ECM proteins on flat biomaterials interface further boosts an important bioengineering target – the biohybrid organ technologies based on two-dimensional protein layers that mimic the arrangement of the natural basement membrane.

Development of artificial basement membrane
Understanding the behavior of ECM proteins on flat biomaterials interface further boosts an important bioengineering target – the biohybrid organ technologies based on two-dimensional protein layers that mimic the arrangement of the natural basement membrane. With this project we aim to develop a synthetic basement membrane (BM) to be used as a supportive lining for cellularized implants, with specific focus on the design of a bioengineered blood vessel. Taking advantage of the self-assembly properties of the two principal components of the BM, laminin and collagen IV, composite matrices of these molecules are produced by mixing them before or during the polymerization of laminin under acidic conditions.

Selected composites will be deposited on scaffolds produced using electronspun nanofibers preferentially made of polyethyl acrilate (PEA), which additionally favour networking of laminin and collagen IV. The resemblance to natural BM will be evaluated in terms of their morphological features and ability to properly induce the formation of biomimetic monolayers of endothelial cells. This project is driven involving joint efforts of our Lab and this of Prof Tatiana Coelho-Sampaio’s from the Federal University of Rio de Janeiro, Brazil.

Electrospinning of nanofibers from natural and synthetic polymers for guiding cellular behaviour
In solution, proteins can form structures of various shapes, including fibers with a diameter of only a few nanometers and with lengths up to centimeters. A fascinating possibility to mimic similar ECM structures is to engineer protein-like or matrix protein-containing nanofibers via electrospinning technology. For this purpose we are developing electrospun nanofibers from natural (e.g., fibrinogen) and synthetic polymers (e.g. PLA, PEA) in order to direct the desired cellular response via spatially organized cues (e.g. fiber size and geometrical organization) as well as by tailoring their chemical and mechanical properties.

Nanofibers-based 3D constructs for culturing of stem cells with spatially organized stimuli
Examining hierarchical biology in only two dimensions (i.e., cells confined to a monolayer) is in most cases insufficient as cells typically exhibit unnatural behavior if excised from native three-dimensional (3D) tissues. Therefore, within the European FIBROGELNET project (under our coordination) we are developing 3D biohybrid constructs that combine the structural and biological properties of electrospun nanofibers with the optimized mechanical properties of specific hydrogels in order to provide stem cells with relevant spatial orientation in three dimensions.

Creating dynamic stem cell niches using stimuli-responsive biomaterials
In addition to engineering the spatial configuration of cellular microenvironments, we are also interested in addressing the dynamic (i.e., temporal) aspects of the stem cell niche. To do that we take advantage of stimuli-responsive polymers to obtain control over an artificial cell-adhesive environment via dynamically altering either cell-cell (using cadherin-like ligands) or cell-matrix (using ECM proteins) interactions. By modulating the strength of adhesive protein-to-substratum interactions we aim to control the stem cell adhesive machinery, and which allows us to mimic the dynamic conditions of the stem cell niche.

Reversible attachment/detachment of human mesenchymal stem cells from thermo-responsible PNIPAM substrata: Cells were cultured at 37ºC for 5 h on PNIPAM (A) and left to detach at room temperature for 2 hours (B), then switched again to 37ºC overnight (C)