A drone is an aircraft –civil or military- piloted by remote control. In this sector of technology, which is constantly expanding around its multiple fields of application, nanodrones are operational platforms which weight less than two hundred and fifty grams.

The SNAV nanodrone, described for the first time in an article in the journal Sensors, weighs thirty five grams and is designed to fly and identify gases in different scenarios to which other technological gadgets cannot access. It has nanometric MOX gas sensors that can respond to gases such as carbon monoxide (CO) or methane (CH4) and other organic volatile compounds (ethanol, acetone, benzene, etc.), with a detection threshold of sensors of the order of a part per million in volume (ppmv), according to the gas and the used sensor.

Different from other larger gadgets, SNAV is able to work in interior spaces –it can cross holes and cracks- and can work in large areas –about 160 square meters- where the chemical emission source is hidden in areas which are hard to access (false ceilings, air duct systems, etc.). 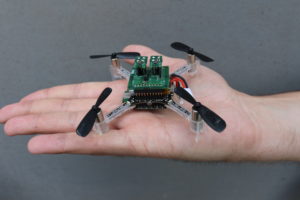 This new device would be especially useful in “rescue operations in collapsed buildings due earthquakes and explosions –SNAV can detect toxic gases and even the compounds unconscious victims inhale- and in a search for drugs or explosives in places which are hard to enter”, notes Santiago Marco, principal researcher at IBEC and member of the Department of Electronic and Biomedical Engineering of the UB, who led the new research study.

In these situations after an earthquake or explosion, rescue teams usually have trained dogs to find the victims. Therefore, the possibility of using autonomous robots in these tasks is an option to bear in mind in the sort and long term.

“Terrestrial robots used to focus the searching on the field of chemical signalling-based localization. Today, the option of using nanodrones broadens the ability and quickness of the robots to move within an interior space and overcome obstacles such as stairs”, notes Marco, head of the Research Group Senyal Intel·ligent per Sistemes sensors en BioEnginyeria (intelligent signalling for sensor systems in bioengineering) UB-IBEC.

How to overcome the effect of turbulences and navigation problems?

Limitations regarding weight and use of the nanodrone and the negative effects of turbulences of the rotor on the sensor signals are great inflection spots for the design and technical development of nanodrones like SNAV. To beat the negative effect of turbulences –which affects the data obtention process-, the UB-IBEC team applied signal procedure techniques that help obtaining useful information from the sensors in the SNAV.

Another critical point is the self-localization of the nanodrone in the action scenario. In general, the control mechanism of drones that fly big distances in open spaces is based on a GPS navigation system. However, this is not a viable option for devices that fly within interior spaces.

Regarding SNAV, “the new nanodrone has accelometers and gyroscopes that help navigation but without the expected precision for its localization. Therefore, this function is based in a series of six radiofrequency transceivers –located in known positions- and a transceiver put in the same drone. This system allows us to fly the nanodrone to the position we want”, notes the researcher Javier Burgués (UB-IBEC), first signer of the study.

As part of the study, the UB-IBEC team of experts worked on the SNAV platform, calibrating the sensors and checking its functioning as well as programing the algorithms for data processing, communication and robotic navigation. Once the SNAV platform was created, all robotic navigation trials from SNAV were carried out at Örebro University (Sweden), in collaboration with the experts Víctor Hernández and Achim J. Lilienthal.

Some future research lines by this research team are aimed to create bio-inspired navigation algorithms to be based, for instance, on the behaviour of insects such as the mosquito or the moth. “Another line we want to work on is the merge of data from multiple gas sensors to increase selectivity towards certain compounds of interest. In this case, researchers would work on experiments in complex scenarios and with chemical interferences”, conclude the experts Santiago Marco and Javier Burgués.