Although initially some types of carcinoma have a very limited ability to invade the tissue around them, they finally find the mechanism to do so, thus increasing the aggressiveness of the cancer.

A team of researchers led by Xavier Trepat (below right), ICREA research professor at IBEC, has identified a mechanism by which cancer cells manage to escape the tumor to promote metastasis. The study, which was published today and will be on the cover of the prestigious journal Nature Cell Biology, and has been supported by the Obra Social “la Caixa”, revealed that tumor cells can reprogramme their healthy neighbours, dragging them out of the tumor and into other tissues. 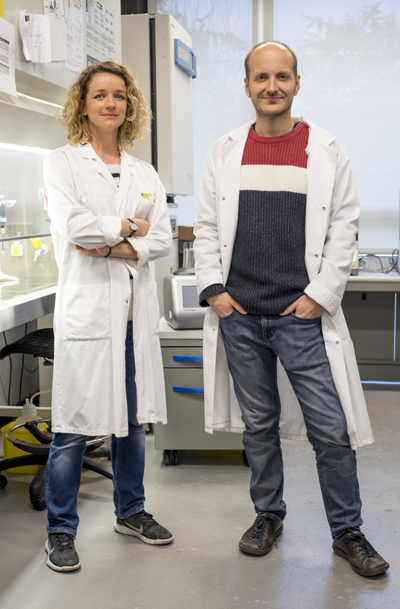 Fibroblasts at the service of tumor invasion
The victims of this ‘kidnapping’ are fibroblasts, a cell type that is responsible for the synthesis and organization of the extracellular matrix. “Fibroblasts are professionals in maintaining healthy tissues, and are able to create tunnels in the tissues to travel through,” says Anna Labernadie (right, with Trepat), Juan de la Cierva postdoc at IBEC and first author of the study. “They use this ability to restore the tissues when we suffer an injury.”

The researchers discovered that cancer cells use the mobility of fibroblasts to escape the tumor and travel through tissues. The surrounding tumor, or stroma, modifies these fibroblasts and uses them for the invasion. From this point, the fibroblasts turn ‘bad’ and start to serve the cancerous cells, tracing paths for them through the extracellular matrix surrounding the tumor.

Although this tumor-host interaction had already been described, the IBEC researchers have now shown that fibroblasts not only create tunnels beyond the stroma, but exert physical forces to drag cancer cells through these tunnels, promoting the direct invasion of healthy tissue. “It’s like a train: the fibroblasts are locomotives and the cancer cells are wagons,” says Labernadie. Through measuring the cellular forces using techniques that they developed and patented themselves, the IBEC group has demonstrated for the first time how fibroblasts drag off the cancer cells to promote tumor metastasis.

Unity is strength
The main challenge of the study was to identify the mechanism by which cancer cells adhere to fibroblasts and move together. This turned out to be a a biophysical interaction between two different proteins, one located on the surface of cancer cells called E-cadherin, and another expressed on the surface of fibroblasts, called N-cadherin. “These proteins are the nanoscale hooks that enable cells to join together,” says Trepat. “Until now, we knew very little about this interaction.”

Despite the different natures of the two proteins, the study reveals that the join between cancer cells and fibroblasts is just as strong as that which connects cancer cells, which emphasizes that this unusual interaction is much more effective than previously thought. “It’s not the first time that we’ve seen a functional junction between two different cell types, but we were surprised at the efficiency of these atypical unions as transmitters of force for cancer invasion,” says Trepat, who’s also a researcher at the Faculty of Medicine of the University of Barcelona and the Centre for Biomedical Research Network in Bioengineering, Biomaterials and Nanomedicine (CIBER-BBN). 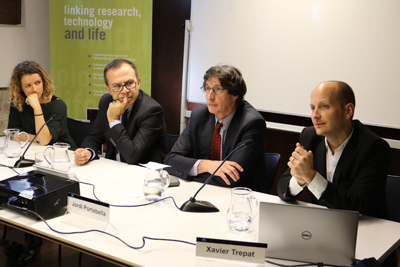 From the laboratory to clinical applications
The researchers used cells and tissues obtained from patients with lung and skin cancer. “We identified this mechanism in very different tumors, which suggests that it may be universal,” stresses Trepat. “Because of the poor prognosis for patients who have suffered cancer metastasis, identifying the mechanisms that promote tumor growth can help us find ways to stop it.”

That the interaction has been specifically identified in cancer makes it a very attractive therapeutic target. The group headed by Trepat has already created a partnership with pharmaceutical company Ferrer and biotech firm Mind the Byte to design inhibitors of this interaction. “The problem for many cancer therapies is that they not only eliminate tumor cells, but also healthy ones,” says Trepat. “We’re working on developing molecules that inhibit the progression of the tumor without affecting the physiological behavior of other cells.”

This research was developed by IBEC’s Integrative Cell and Tissue Dynamics group led by Xavier Trepat in collaboration with the group of Erik Sahai at the Francis Crick Institute in London. The project received funding from several sources, including MEIC (formerly MINECO), the Generalitat of Catalonia, the European Research Council, the Obra Social “la Caixa”, Marie Sklodowska-Curie Actions, EMBO fellowships, FP7, the Fundació La Marató de TV3 and an AXA Research grant.