Researchers from IBEC, the UCL (UK), UPC (Spain) and the TU/e (Netherlands) show that activation of the RAS oncogene (a mutation occurring in approximately 30% of human cancers), induces tumour features in an epithelium via coordinated physical changes of all cells forming the affected tissue. Published in the scientific journal Science Advances, the new work suggests that future cancer treatments should target both the biological processes underlying the disease and the evolving mechanical structure of the affected tissue. 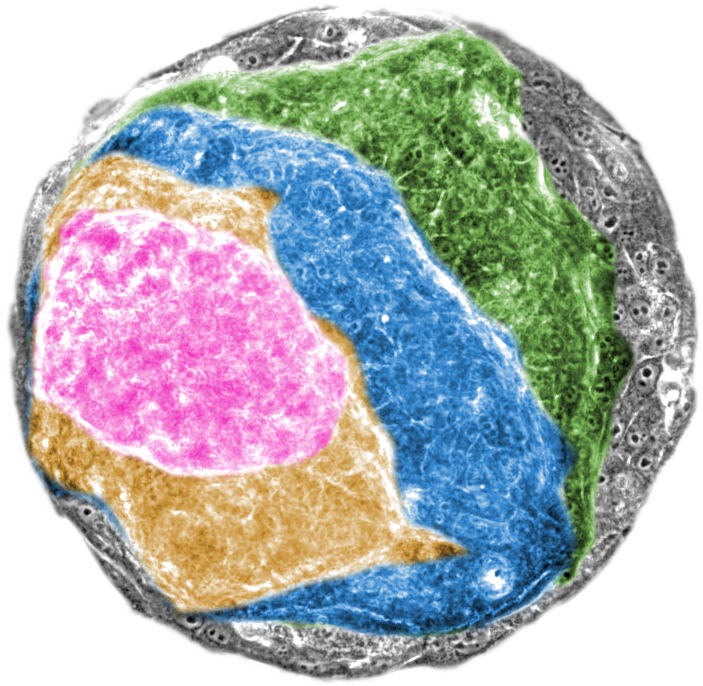 Cancer is a complex family of over 200 distinct diseases notoriously difficult to study and treat. This is in part due to the myriad of genetic mutations causing cancer, where each form of the disease disrupts cellular and molecular processes in different ways. Among these is the RAS gene, whose mutation occurs in around 30% of human cancers and is known to cause the loss of the physiological architecture of epithelia. Epithelia are important tissues in our bodies and produce the most aggressive forms of cancers: the carcinomas. We are still piecing together how oncogene activation leads to loss of epithelial morphology, and increasing evidence points at the physics of tissues as a missing interlink.

Now, a new study led by Vito Conte (IBEC and TU/e) has provided further insights into how tissue physics mediates oncogene expression and loss of tissue architecture at early stages of tumour development. “We have long known cancer alters the physics of tissues”, Conte says, and he added “We are now gradually understanding that tissue physics also feeds back into cancer progression. This reciprocity opens new avenues to strengthen current therapeutics or even device new ones like in the case of mechano-therapeutics”.

Starting with a sheet of normal cells

Cells in epithelia operate in a highly coordinated manner to maintain the architecture and morphology that the tissue requires to perform its function.

The loss of this homeostasis and subsequent breakdown of tissue architecture is a hallmark of tumours that begin in the epithelia, which account for up to 90% of all cancers.

Conte and his international team of researchers sought to investigate how physics is involved in this process when the RAS oncogene is activated in a single layer of epithelial cells. “Identifying mechanical changes at the cellular level directly in the human body is difficult. So, our main challenge was to develop a way to grow normal human tissue in the lab, and then monitor in real time the structure and mechanics of tumours in these tissues when we switched on the RAS oncogene” notes Agata Nyga, the first author of the study, to which also contributed researchers Xavier Trepat, Marina Uroz and Giulia Fornabaio from IBEC and scientists from University College London (UCL).

Transforming malignancy from 2D to 3D

The researchers grew 2D sheets of epithelial cells in the lab and activated the RAS oncogene in selected samples. Within just 24 hours, oncogene activation induced structural and mechanical instability in the tissues by unbalancing the highly-controlled intercellular forces that give epithelia their barrier function. In less than 48 hours, the RAS-activated tissues had transformed into a 3D mass, indicative of the onset of tumour growth.

On the other hand, the non-transformed epithelia samples maintained their 2D, sheet-like control structure. Closer inspection of the samples with the activated RAS oncogene revealed that the cells had first separated into two discrete layers, which primed the entire tissue to contract and form a 3D cancerous mass. The researchers backed up their findings by modelling the data in a computer simulation.

“Our study showed that the change from a 2D to a 3D structure is controlled by a specific physical mechanism of the RAS-transformed tissue. This means that all RAS-transformed cells forming the tissue must coordinate their mechanical effort in a specific physical way to cause the morphological change. If we understand why and how this happens it is possible that physical changes of this kind could be used as markers of carcinogenesis in the future, which could then be targeted by mechano-therapies,” points out Conte.

“Experimental evidence supporting the mechanical nature of cancer is becoming overwhelming and the past scepticism with which these ideas have been met has started receding”, says Conte. “However, we still have work to do in order to fully convince the cancer research community (and the research councils funding our research) that a more inclusive approach is needed to study cancer: an approach that combines mechanics at par with biochemistry, immunology and molecular biology”.

Within hours, the RAS oncogene was able to unbalance the highly-controlled intercellular forces that give epithelia their barrier function.