An international study co-authored by IBEC’s researchers has identified nickel as a key conductive component in the wires found in cable bacteria. This ground-breaking finding, obtained by combining high-resolution microscopy, spectroscopy and chemical imaging, has been published in the prestigious journal Nature Communications. 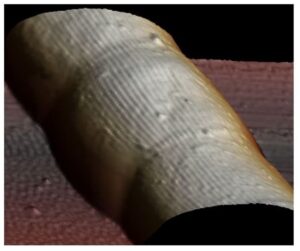 In 2010, scientists observed mysterious electrical currents on the seafloor. After sifting through sediment samples, it was later revealed that the instigators were tiny multicellular organisms called cable bacteria. Further research into these newly discovered life forms showed that each one is made up of a long string of cells —sometimes more than 10,000 of them— stacked on top of each other. Thanks to wires in their cell envelope that run continuously from one cell to the next, they have the unique ability to carry electrical currents over centimetre-long distances.

The availability of organisms with extraordinary electrical properties has great potential for new applications in bio-electronics. However, their structure and underlying electron transport mechanism has remained poorly understood. Now, an international team of researchers has made an important new discovery. Using a combination of high-resolution microscopy, spectroscopy and chemical imaging, they have identified nickel as the active metal that enables conductivity in these “living wires”. This ground-breaking finding represents a mechanism of long-range electron transport that was previously unknown to science. The work, published in the prestigious journal Nature Communications was led by Drs. H.S.T. Boschker (Delft University of Technology) and F. J. R. Meysman (University of Antwerp), alongside scientists from 17 other centres, including IBEC researchers led by UB Professor Gabriel Gomila.

Cable bacteria belong to the Desulfobulbaceae family. Despite being the focus of intensive research since they were first discovered a decade ago, the lives of these unusual organisms remain highly enigmatic. This is partly due to their complex metabolism and lifestyle, which strongly hampers culturing and biomass collection. As a result, many traditional techniques used to analyse other types of bacteria are unable to shed light on cable bacteria.

This multicentre study has overcome this hurdle by combining state-of-the-art techniques to get a closer and clearer look at individual filaments of cable bacteria —and their peculiar conductive fibres— than ever before. The results revealed that the fibres are composed of a nickel-rich protein core (just 27% of their cross-sectional area) that channels the electric current. The outer layer is composed of a nickel-deficient insulating protein shell. In this respect, their cross-sectional structure resembles that of standard household electrical wires.

The researchers further demonstrated the role of nickel in their conduction by oxidising or selectively removing it from certain samples. When they did so, the conductivity of the fibres dramatically decreased. Their results extend the known length scale of protein conduction from micrometers to centimetres.

There is still much about cable bacteria that remains to be solved, such as the genetic and molecular basis of their highly efficient long-range electron transport. However, this study paves the way to further unravel the secrets of these enigmatic organisms. Once we have a better understanding of exactly how they harness electricity, they could one day be used to increase the efficiency of microbial fuel cells, and even to help clean up oil spills from oceans, among a host of other potential applications.

This ground-breaking finding represents a mechanism of long-range electron transport that was previously unknown to science.

Gabriel Gomila, Group Leader at IBEC and Professor at University of Barcelona (UB)