Willpower is the key to enhancing learning and memory: researchers uncover the mechanism

An international team led by the SPECS Laboratory at the IBEC has identified, for the first time in humans, the physiological mechanism responsible for the effectiveness of learning processes based on self-motivation and freedom of choice. The protagonists of this mechanism are theta-type brain waves, which regulate the ability of the human hippocampus to fix and retrieve information. 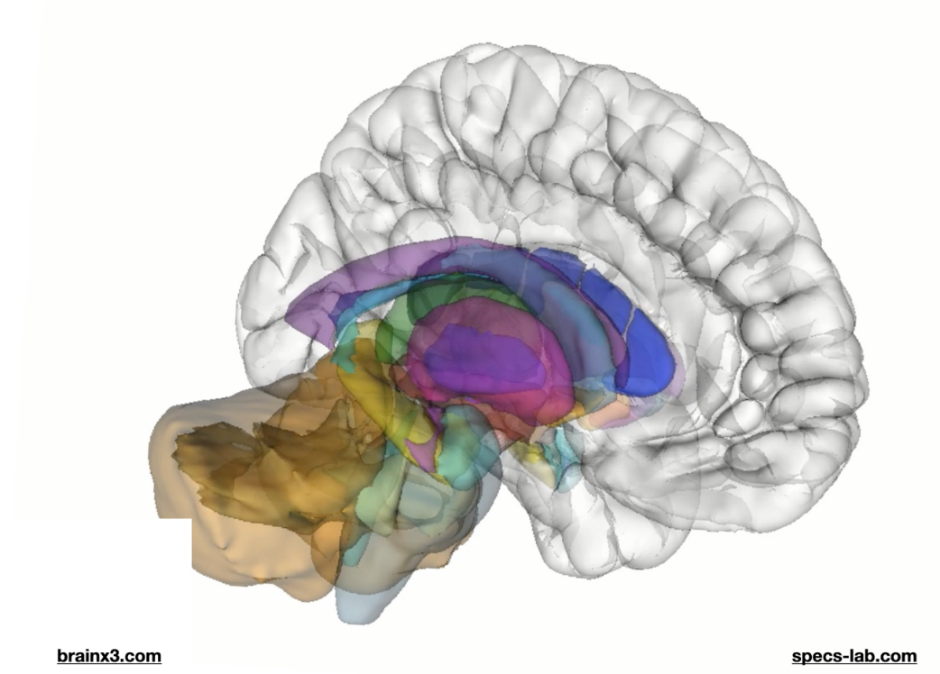 Figure: The human brain with its main sub-systems. The hippocampus, the target of the current study is the elongated structure in the foreground shown in yellow.

Active or voluntary learning is a major topic in education, psychology, and neuroscience. Over the years, numerous studies have shown that when learning occurs through voluntary action, there is a modulation of attention, motivation and cognitive control that makes the process much more effective. Consequently, memory is benefited. However, although the physiological processes underlying this reality had been identified in the brain of mice, their existence in our species had not been corroborated.

Now, an international group of researchers led by ICREA Research Professor Paul Verschure from the SPECS laboratory at the Institute for Bioengineering of Catalonia (IBEC) and Professor Nikolai Axmacher from the Department of Neuropsychology at Ruhr University Bochum (Germany), in collaboration with Pompeu Fabra University and Dr. Rodrigo Rocamora from Hospital del Mar, have identified for the first time in humans, the mechanism responsible for this phenomenon.

The key lies in the oscillations of theta waves generated by the hippocampus of the human brain, when it is the brain that has control of the learning process.

The work, recently published in the prestigious scientific journal PNAS (Proceedings of the National Academy of Sciences of the United States of America), is based on an experiment carried out with epilepsy patients. In a virtual reality game, participants navigated a square track, and were asked to recall images of objects presented at different locations on the track. Navigation could be active, whereby participants freely controlled their movements; or passive, if it was another subject who planned the route and, therefore, who decided the order of exposure to the images. In this second modality, therefore, the subjects did not exercise any control over how to memorize the dispersed objects in the virtual environment.

By studying the electrophysiological activity of the hippocampus and testing the recognition of the objects at the end of the experiment, the researchers were able to verify the importance of active learning in each of the participants. “In the subjects who had had the possibility to carry out active navigation, an increase in theta oscillations was identified that made learning and subsequent memory more efficient. But, in addition, what happened was that there were two consecutive phenomena, separated by milliseconds. One of them corresponded to the encoding of the information; the other, to the retrieval of previously stored information: the reactivation of memory”, explains Dr. Daniel Pacheco, the first author of the study.

Indeed, the subjects who could freely navigate through the virtual environment promoted a theta phase code that favoured the fixation and retrieval of information, as was the case in previous studies carried out with rodents. These results therefore constitute a bridge between the experimental results in the animal model and the investigation of human memory.

This study provides empirical data that confirm the importance of individual freedom to promote effective learning in humans.

The practical applications of this discovery are wide-ranging and profound. “Identifying these two different moments in theta oscillations could facilitate concrete interventions. For example, we could manipulate the oscillation to modify traumatic memories or enhance memories that are lost due to amnesia or neurodegenerative diseases”, continues Dr. Pacheco. In addition, it has great relevance in the educational field, since it empirically confirms that elements such as motivation, cognitive control and the ability to decide for oneself are key to effective learning.

“The significance of this discovery is enormous,” says Paul F. M. J. Verschure, ICREA Research Professor and SPECS Group Leader at IBEC, another of the study’s authors. “We have managed to get to this point after more than 20 years of research and the results obtained are clear. The fact that willpower is key to the integration of information in memory gives us arguments to say that, if we turn people into passive subjects, if they are coerced, their learning will be worse.”