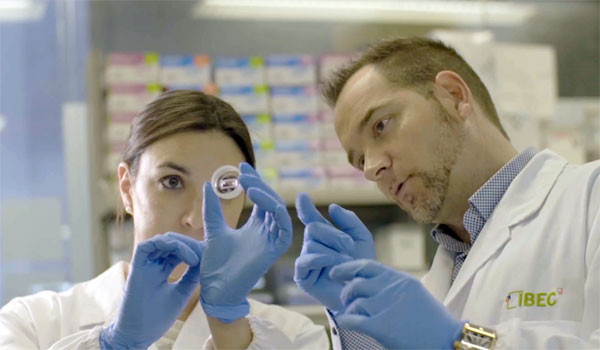 Studies using in vitromodels of muscle tissue, whether in biomedicine or in the cosmetic industry, are largely based on 2D models of cell growth, which do not represent what actually occurs in the human body. There is, therefore, a great need for three-dimensional models that allow reliable and reproducible studies in fields such as tissue engineering, disease modelling and testing of new drugs and bio-hybrid robotics (combination of living tissues and robots).

Now, thanks to tissue engineering and 3D bioprinting, researchers from the Institute of Bioengineering of Catalonia (IBEC) led by Samuel Sánchez, ICREA Research Professor and principal investigator of the “Smart Nano-bio-devices” group, have developed a new 3D platform with human skeletal muscles that mimics real tissue. This new approach will allow studying in detail both the development of muscles and the diseases they suffer, as well as allowing a reliable evaluation of drugs and cosmetics. The work has been done in collaboration with the Lubrizol company and has been recently published in the journal Biofabrication.

The new three-dimensional model of muscle tissue developed by IBEC researchers is capable of mimicking the 3D structure of native tissue. In addition, it provides quantitative information on force generation and muscle contraction patterns through electrical stimuli with carbon electrodes manufactured by the researchers themselves.

To generate the new muscle, the researchers started from myoblasts, precursors of muscle cells, together with a mixture of different components that simulates the extracellular environment and helps to give the new tissue 3D shape and structure.

The use of human cells in the new platform, in addition to providing reliability and precision, has other advantages such as the possibility of personalization based on patient cells, and to dispense with the use of animals for experimentation, eliminating the ethical implications that it entails.

This model offers the versatility and flexibility necessary in multidisciplinary approaches to understanding muscle development and its response to different treatments.

The new platform is ideal for evaluating drugs and cosmetics and understanding how they affect muscle and control its behaviour.

The possibility of studying muscle aging on a 3D platform is highly relevant for the cosmetic industry, since it is closely related to functional and physiological alterations of the facial muscles. In the proof of concept to simulate muscle aging, the researchers used tumour necrosis factor-α (TNF-α), a small protein from the group of cytokines, related, among others, to the loss of muscle mass and tone. When treating the muscle with TNF-α, the researchers observed changes in relaxation and a reduction in muscle strength, similar to what occurs in a real aging process.

Finally, to evaluate muscle functionality and the effect of new compounds, the researchers conducted tests in collaboration with the Lubrizol company. The new platform allowed to corroborate the efficacy of a new anti-wrinkle cosmetic product, Argireline® Amplified peptide, which showed a reduction in the force of muscle contraction and greater relaxation. Since then, the peptide has been introduced to the market with exceptional speed, creating a massive interest in customers around the world, and is already present in some final products on the market.

With our 3D muscle model we will be able to understand key aspects of muscle function during aging and study the physiological processes that contribute to the appearance of expression wrinkles, as well as the necessary ways to reduce them.