Those same laws predict that mechanical waves should not occur in the cells of our body, because cells are very viscous, like honey, and so any waves produced would slow or stop very rapidly. However, a study carried out by IBEC researchers shows how collisions between two cellular tissues do result in mechanical waves being formed.

In their work, published today in Nature Materials, a team led by IBEC researcher and ICREA research professor Xavier Trepat has shown how cells are able to sustain and transmit these mechanical waves over distances of more than a millimeter, equivalent to three hundred cells lined up one after another. “After a collision, the cells transmit mechanical information collectively, propagating a wave of deformation as if they were a continuous material,” says first author of the study Pilar Rodríguez, who carried out her doctoral studies in Xavier’s group. “This is the first time that this behavior has been observed in living tissues.”

Initially, the researchers weren’t looking for these waves; they were studying the collisions between tissues expressing different ephrins, a family of proteins with implications in colon cancer. To do this, they established a collaboration with Eduard Batlle’s group at the IRB. “Colon cancer can begin when the barrier between cells expressing different ephrins ceases to function well, allowing some undifferentiated cells to invade other tissues and form a tumor,” says Pilar. While studying collisions between cells that expressed one ephrin (Eph) and those that expressed another type (ephrin), the researchers unexpectedly discovered that the tissues reacted to the encounter by transmitting mechanical waves on both sides of the collision. 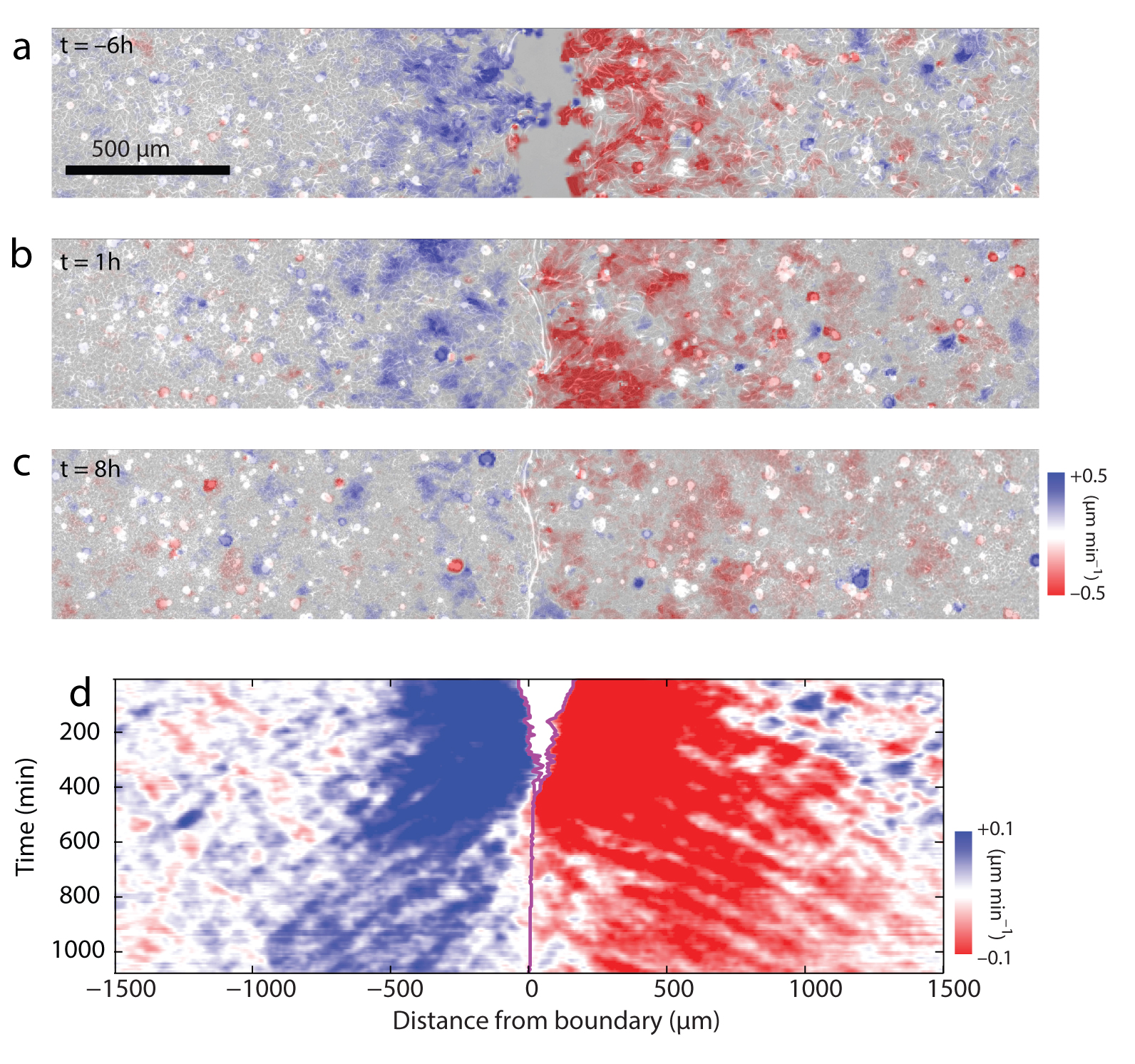 Panels A, B and C show in blue (positive velocities) and red (negative velocities) the propagation of mechanical waves after tissues collide. Panel D shows the temporal evolution of wavefronts, which originate at the collision point and replicate for 16 hours afterwards.

“This is a new phenomenon that we couldn’t have predicted, because the current theoretical framework can’t explain it,” says Xavier. “We now have to revise our understanding of the mechanical properties attributed to cells, and may need to incorporate some new ones. In fact, we need to change our whole way of thinking about living systems and consider them a new state of matter, called ‘active matter’.”

The researchers don’t know what the function the newly discovered waves might be. “In biology, chemical waves are often responsible for transmitting information. It’s possible that cells also use physical waves to share information about their distribution in space, or even to intervene in some stages of embryonic development,” says Xavier.

A better understanding of these physical waves could be of great relevance to uncover new knowledge about why cancer occurs, or how organs and tissues are formed.

The work was funded by MINECO, the Generalitat de Catalunya, the European Research Council (ERC) and the Obra Social “La Caixa”.