“In optogenetics we can photocontrol neuronal activity with light using genetic manipulation of the target cells, and photopharmacology affords equivalent results using light regulated drugs,” explains Pau. “Our project’s strategy aims to replace degenerate photoreceptors with molecular prosthetic ‘switches’, and is applied in tissue that is naturally accessible to light: the eye.”

The project, a chemical tour de force, is based on a method to synthesize amine-containing compounds that can link covalently with the target protein in the retina without genetic manipulation. “If the vision restoration capability of these small molecules can be demonstrated in vivo, their translational impact will be very high and safety testing could begin immediately,” says Pau.

Within the framework of the Federación de Asociaciones de Retinosis Pigmentaria de España (FARPE), the Fundación Lucha Contra la Ceguera (FUNDALUCE) maintains and manages a National Research Fund for the promotion of scientific and medical research for the prevention, treatment and cure of hereditary and degenerative diseases of the retina, mainly Retinitis Pigmentosa, a progressive loss of vision in which the patient suffers night blindness, a reduction in peripheral vision, loss of visual acuity, small flashes that hinder the vision, or changes in the perception of colors. The evaluation of eight projects that were submitted to the 2016 FUNDALUCE call was carried out by MINECO’s Agencia Nacional de Evaluación y Prospectiva (ANEP) and an Advisory Committee made up of expert ophthalmologists from FARPE and FUNDALUCE. 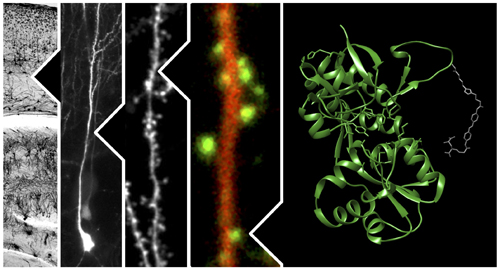 Image: Neuron structures at different scales, from neural circuits (left) to dendritic spines (center), stained by various techniques for optical microscopy and fluorescence. The molecular prostheses are synthetic compounds (the gray structures in the image on the right) that permanently bind to proteins (green) to supply a certain function, such as sensitivity to light in a degenerated retina. The gray compound acts as a light-regulated drug that activates the protein upon illumination.

Patients’s association FARPE was created in 1990 by a group of people affected by Retinitis Pigmentosa. About twenty thousand people among the 1,800,000 to 2,000,000 people in Spain that suffer from degenerative diseases of the retina have this disease. Since 1998 FUNDALUCE has supported the most relevant scientific research project of the year that is tackling this pathology and others like it.

Pau was presented with the grant at the XIX Annual FARPE-FUNDALUCE Research Conference on 26th October at the ONCE auditorium on Gran Via de Les Corts Catalanes in Barcelona.

IBEC in the Media: http://ecodiario.eleconomista.es/sociedad/noticias/8701697/10/17/Las-xix-jornadas-de-investigacion-sobre-la-retinosis-abordaran-la-lucha-contra-la-ceguera-hereditaria-y-genetica.html