In their study published in Cell yesterday, IBEC’s researchers reveal how forces trigger the expression of certain genes by increasing the activity of a protein called YAP in the nucleus of the cell.

As well as playing an essential role in development by governing processes such as organ size, YAP is also known as an oncogene – in other words, it activates the transcription of genes that promote cancer by allowing cancerous cells to proliferate, or by stopping them from dying off.

The researchers saw that if a force doesn’t reach the nucleus of a cell, YAP remains in its balanced state between the cytoplasm – the cellular fluid – and the nucleus. However, if the force affects the nucleus – as occurs if there is a particularly hard area of tissue nearby, such as a tumour – the cells respond to this by opening the pores of the nucleus, allowing more YAP to enter, where it triggers the proliferation or survival genes that allow cancer to spread and grow. 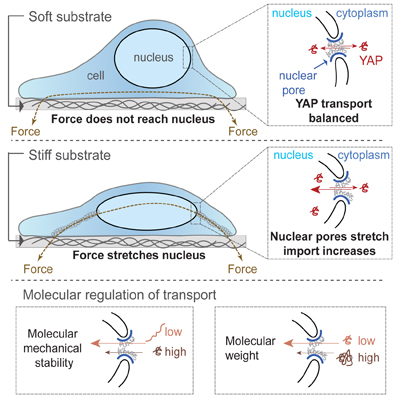 “We now understand how the rigidity of tumour tissue affects cells at the gene level and promotes the survival strategy of cancerous cells,” says Pere, assistant professor at the UB and head of IBEC’s Cellular and Molecular Mechanobiology group, which carried out the study together with the institute’s Cellular and Respiratory Biomechanics and Integrative Cell and Tissue Dynamics groups, in collaboration with researchers in King’s College in London.

“Targeting the mechanical connection between the nucleus and the body of the cell – its skeleton, which responds to forces – could potentially prevent the adverse effects of tissue stiffening in cancer or fibrosis,” adds Alberto Elosegui-Artola, first author of the study. This mechanosensing mechanism might also be used by cells in other processes where forces play an important role, such as in embryonic development.

This work was supported by the European Commission, the Spanish Ministry of Economy and Competitiveness, the European Research Council, Obra Social “La Caixa”, Fundació la Marató de TV3 and the Basque Government.

IBEC in the Media: http://www.lavanguardia.com/vida/20171026/432372010120/descubren-como-las-fuerzas-fisicas-activan-genes-implicados-en-el-cancer.html