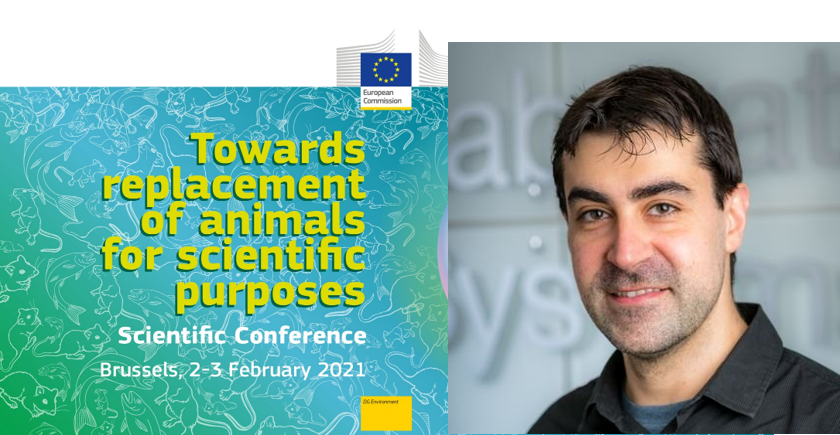 The scientific conference “Towards replacement of animals for scientific purposes” took place online on 2 and 3 February 2021. Organised by the European Commission, the conference aimed to accelerate the move away from using animals in science and testing. The conference was addressed to all those working with animal models or alternative approaches, or both, in any field of basic or applied science.

Joan Montero, Ramon y Cajal Researcher at the Nanobioengineering Group at IBEC, participated on February 3rd as speaker in a session within the series “Cutting edge science: latest scientific advances to improve research and testing tool box”. Montero was interviewed about in his work at IBEC on precision medicine and cancer.

In these Interviews, also participated Erwin Roggen from ToxGenSolutions and Anne van der Does from Leiden University, speaking about Alzheimer’s disease and respiratory tract diseases, focusing on non-animal models in their research and the benefits.

During this session, Francesca Pistollato and Laura Gribaldo from the Joint Research Centre of the European Commission also presented an overview on JRC project on alternatives in biomedical research.

In general, the main objectives of the conference were:

The conference was a fully virtual event in which participants were able to engage in discussion during moderated sessions. This is the second conference that the European Commission has organised on this topic. The first conference took place in December 2016.