Vertebrate nervous system, including the neuronal circuits in the spinal cord and brain stem, rely, among others, in the correct functioning of glycine receptors (GlyRs). These receptors are involved in locomotion, pain sensation, breathing, and auditory function and very often their misfunctioning is related with the development of serious neurological disorders. Very few drugs have been described until the moment that can modulate glycine receptors and unfortunately, they are not very specific and cause secondary effects.

Now, a European consortium (Modulightor) coordinated by ICREA Research Professor Pau Gorostiza, leader of the “Nanoprobes and Nanoswitches” group at IBEC and member of the Biomedical Research Networking Center in Bioengineering, Biomaterials and Nanomedicine (CIBER- BBN), has developed, for the first time, organic molecules that convey light sensitivity to GlyRs, named Glyght and Azo-NZ1. The work, published in two papers in eNeuro and Cell Chemical Biology journals, show an effective and specific control over GlyR activity in vitro and in vivo. These photochromic organic molecules can be controlled by light in a non-invasive way and allow a precise spatial and temporal selectivity, favouring specific drug action. The other laboratories of the consortium are led by Carme Rovira (University of Barcelona), Piotr Bregestovski (Aix-Marseille University), and Burkhard König (Regensburg University).

Glycine receptors (GlyRs) are inhibitory receptors broadly distributed in the central nervous system of vertebrates and play a key role in regulating (inhibiting) the transmission of the signals through neurons. They are involved in disorders such as hyperekplexia (excessive startle response), inflammatory pain sensitization, autism, temporal lobe epilepsy, breathing disorders, alcoholism, and motor neuron disease. To date, only few drugs were described to target GlyRs, revealing the limitations of traditional pharmacology. One of the main challenges in treating such disorders is to find compounds that act in a spatially and temporal fine-tuned way to obtain a specific drug action and develop future therapies with reduced side effects.

In recent years, the development of photopharmacology, a field that combines biological approaches with photochemistry methods, appears as an alternative to design safer and more efficient therapies based on photochromic molecules, which use light to control biological processes and understand protein dynamics. 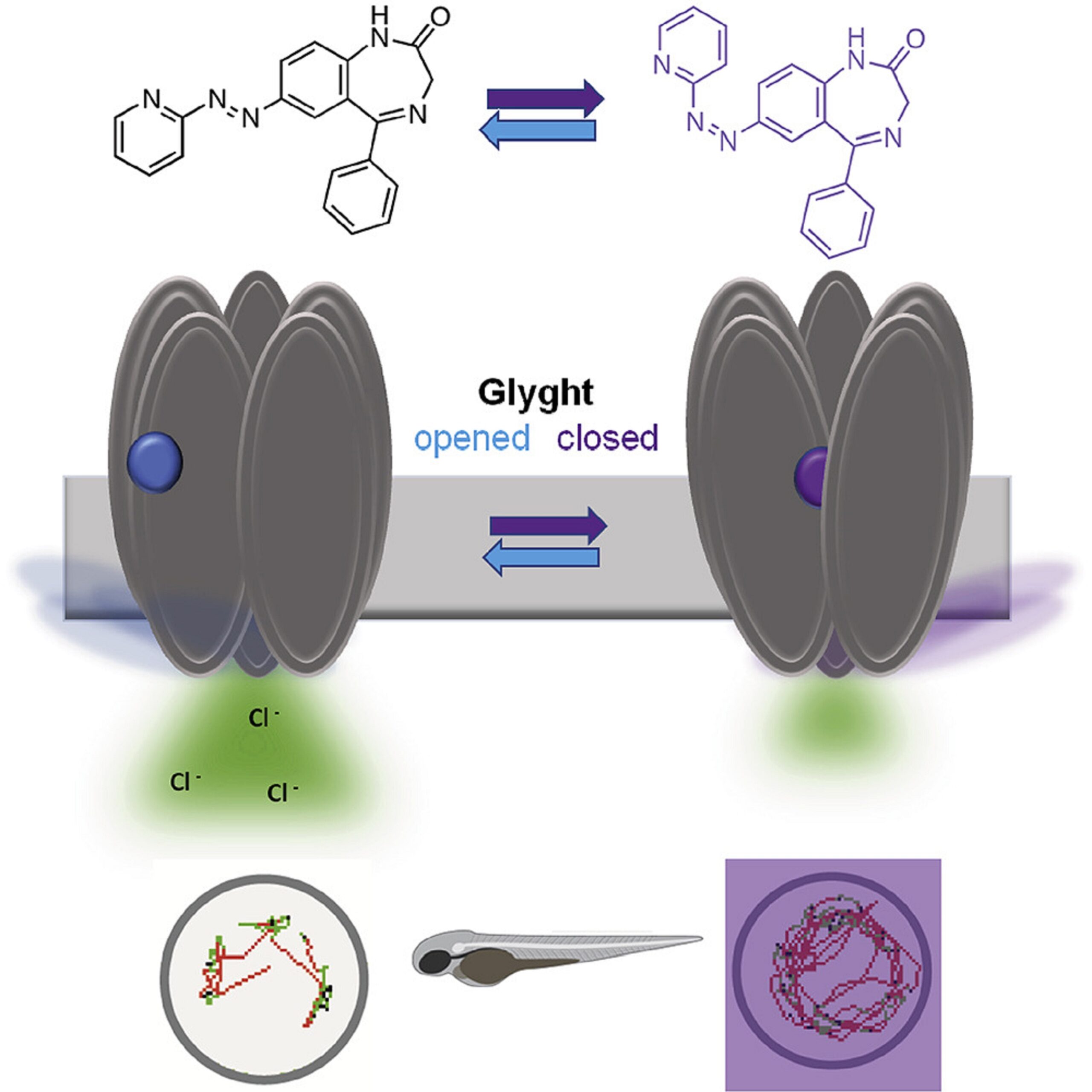 Glyght (GlyR controlled by light) and Azo-NZ1 (azobenzene-nitrazepam-based photochromic compound), the new molecules developed by IBEC researchers and their collaborators, can control the activity of the GlyRs in a light-dependent manner. When illuminated with UV-light they change their configuration and bind to a specific region of the GlyR, inhibiting its function. On the other way round, the binding can be reversed by blue light.

Their activity in inhibiting the action of GlyRs was supported by modelling analysis and further demonstrated in vitro in cultured Chinese hamster ovary cells and mice’s brain slices, and in vivo in zebrafish. In the in vivo experiments, researchers could clearly observe the effect of switching on and off the modulators of GlyR on fishes’ behaviour. Taken together, the results show that these molecules may be useful tools for controlling neuronal circuits in different parts of the nervous system, as spinal cord, brainstem, cerebellum.

Galyna Maleeva, first author of the paper published in eNeuro.

Glycine receptors are key players in the nervous system

GlyRs are ligand-gated ion channels present at the membrane of neurons and have important roles in mediating inhibitory neurotransmission in the spinal cord and brainstem. GlyRs are also very important in other physiological processes and regulate the excitability in the retina, hippocampus and amygdala, and participate in movement control, breathing and processing of sensory information. When activated by glycine, an amino acid and neurotransmitter, GlyR generates a transmembrane current of chloride which at the end inhibits the transmission of the signals through neurons.

Both Azo-NZ1 and Glyght cause a strong inhibition of glycine-induced currents and represent a promising tool for pharmacological applications as well as for light-controlled specific regulation of neuronal plasticity and excitability in the different brain regions.

The possibility to control those receptors with light is a promising way to understand the neuronal circuits they control and to develop drug-based phototherapies in intact animals.

These new molecules pave the way to the development of photoshichtable drugs that can specifically modulate receptors in every disease, reducing side effects and increasing the effectivety of the treatment.