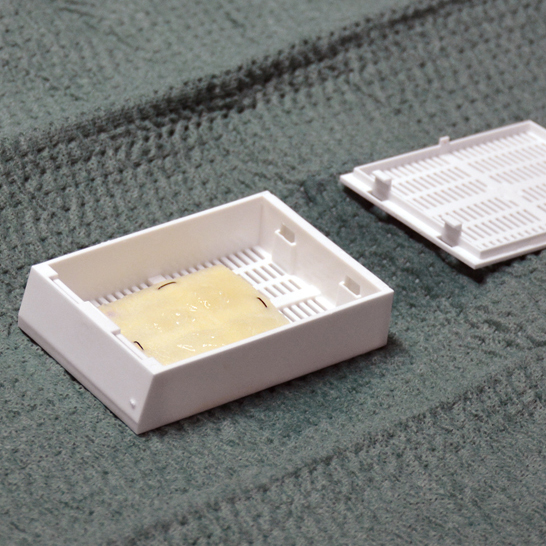 When a person suffers a myocardial infarction, their heart loses strength. This is due to the death of cells in the affected area, which stop receiving blood from the coronary arteries. This can affect the patient’s ability to carry out day-to-day activities, as well as their life expectancy and quality of life. In extreme cases, the patient may need a heart transplant. The more common result, however, is that the patient has a residual scar that dilates the heart and evolves into heart failure. It is these patients that could significantly benefit from the new technology which has been developed, and successfully implemented to a patient in Barcelona in May 2019.

A collaboration between the ‘Germans Trias i Pujol’ Hospital, the Blood and Tissue Bank (BST) and the IBEC in Barcelona has been able to take a step forward for heart patients, thanks to a simple formula combining medicine, science and engineering.

Scientific studies discovered a few years ago that mesenchymal stem cells (from the umbilical cord) have important immunomodulatory and anti-inflammatory properties. In 2013, new studies in mice also highlighted the ability of these stem cells to form small blood vessels in the infarcted area of ​​the heart, and to reoxygenate it. The latest preclinical studies using pigs have also demonstrated that bioimplants with stem cells have the ability to significantly reduce the size of the infarction, as well as to improve cardiac function.

The difficulty was finding the optimal way to introduce the stem cells into the infarct area of ​​a human patient. Previous studies had shown that, with direct administration of stem cells, either by intraveous injection, or injection within the myocardium itself, the cells died before they could promote any benefit, or were directed non-specifically towards organs other than the heart.

“Using bioengineering, we have been able to comply with a crucial requirement – that the patient’s bioimplant has a hardness comparable to that of their ventricle. The success of the implant has only been possible thanks to a multidisciplinary effort.

“Using bioengineering, we have been able to comply with a crucial requirement – that the patient’s bioimplant has a hardness comparable to that of their ventricle. The success of the implant has only been possible thanks to a multidisciplinary effort.

For this reason, the therapeutic approach of the researchers was to incorporate the cells into a pericardium matrix, acting as a vehicle, which enabled application of the cells that it contained directly on the infarcted area.

The great challenge in doing so was to transform a 2 cm² prototype used in the preclinical model into a 16 cm² ​​bioimplant, and to comply with all safety and regulatory requirements for human use. Scientists and engineers of the IBEC Cellular and Respiratory Biomechanics Group, led by Daniel Navajas, studied the mechanical properties of the different matrices that were developed in the successive phases of the project. According to Navajas, these studies have ensured that the implant applied to the patient has a hardness comparable to that of the ventricle.

The end result is a bioimplant formed by decellularised human pericardium and enriched with mesenchymal stem cells. Researchers who have developed it have named it PeriCord, after the two components that form it: the pericardium and the (umbilical) cord.

Pioneering surgery approved by the AEMPS

In late 2018, final approval of the PeriCord for human use was obtained from the Spanish Agency for Medicines and Health Products (AEMPS). The medicine is made in the advanced therapy white rooms of the Blood and Tissue Bank, and is implanted in the operating rooms of the ‘Germans Trias’ Hospital. It was necessary to wait until May 2019 to implant the new therapy in a first patient, in a procedure coordinated by the Cardiac Surgery Service, led by Christian Muñoz.

According to the hospital, it is the first surgical intervention of this type worldwide. It is therfore necessary to follow the safety assessment procedure for this new type of therapy, which is halfway between conventional surgery and an organ transplant. Progress of the first patient to undergo surgery is being monitored by the Hospital Cardiology Service. The patient has improved considerably and the first MRI scan shows a reduction in the size of the infarction scar at 3 months post-implantation.

This project was made possible by the support of the Department of Health of the Generalitat de Catalunya, through ‘PERIS’ grants; the Carlos III Health Institute and “la Caixa”.