On the International Day of Women and Girls in Science, the Institute for Bioengineering of Catalonia (IBEC) presents this February the 11th a female superhero figure which aims to reach out to the general public, in a popular way, one of the disciplines that are called to impact the medicine of the future: bioengineering. 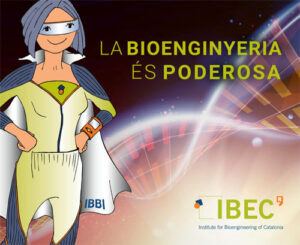 Through a series of comics, animations and other ressources with the superhero IBBI as the protagonist, IBEC will present stories about organoids, organ regeneration or nanobiomedicine that are already impacting fields such as the fight against COVID, cancer or Alzheimer’s.

Under the motto “Bioengineering is powerful” and with the appearance of a scientist, IBEC will use this figure to achieve three objectives: to break gender roles in science, to promote scientific vocations among the younger population and to publicize the applications in bioengineering for health. Bioengineering, the discipline that combines engineering with other fields of knowledge such as biology, chemistry or physics applied to biological systems with the aim of finding solutions to health problems, is beginning to impact the clinical practices. In this way, medicine begins to incorporate elements that until now seemed science fiction and that are already a reality: patches with stem cells for infarcted hearts, nano capsules to deliver drugs to COVID or Alzheimer’s patients, or smart plasters to regenerate chronic wounds.

In this context, superhero IBBI will show how bioengineering and its superpowers are changing the way we conceive medicine, with examples such as tissue regeneration (self-repair), nano microscopy (supervision) or 3D bioprinting (ability to print tissues and organs with living cells).

The Superhero IBBI wants to communicate to people of any age interested in science and  in bioengineering. From school and college teachers, to families and patients, IBBI wants to help discover how bioengineering contributes to providing solutions to real problems related to our health.