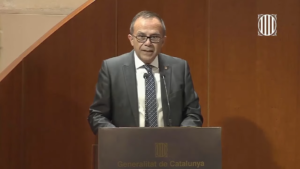 Josep Samitier i Martí, Director of the Institute for Bioengineering of Catalonia (IBEC), received yesterday the Narcís Monturiol Medal for his contributions to the Catalan system of research and technology. At the ceremony, celebrated in the Auditorium of the Generalitat de Catalunya, Samitier acknowledged during his speech this recognition, and reminded us the fundamental motivation: “Those of us who are here today, have tried to understand and provide solutions to the questions and needs of society.“

In total, ten researchers from the Catalan knowledge system (six men and four women) received yesterday this distinction, as well as a research center that was awarded the Narcís Monturiol Plaque.

Josep Samitier and the Nanobioengineering

Josep Samitier Martí is Director of the Institute for Bioengineering of Catalonia (IBEC), Professor of the Department of Electronic and Biomedical Engineering at the University of Barcelona (UB) and President of the Catalan Association of Research Entities (ACER). He is a promoter of nanobioengineering through the research group he leads at IBEC, which focuses on applying nanotechnology to develop new biomedical systems and devices, mainly for diagnostic purposes, and integrated organ-on-a-chip microfluidic devices, to study diseases and for drug screening. Currently, he is the coordinator of the Spanish Nanomedicine Platform (NANOMED Spain) and is also a member of the Institute of Catalan Studies (IEC).

“All of us who are here today have tried to understand, and respond to, questions and needs of the society.”

Josep Samitier was a founding member of the European Institute of Innovation & Technology in Health (EIT Health). He was also co-director of the Microsystems Engineering Center (CEMIC) of the Technological Innovation Network (XiT). For four years he was deputy director of the Barcelona Science Park.

In the academic field, in addition to being Professor at the Department of Electronic and Biomedical Engineering at the University of Barcelona (UB), he has been vice-rector for International Policy and Innovation, as well as International Research Programs, and acting rector of the same university.

About Narcís Monturiol Medal and other winners

These awards, instituted by the Generalitat in 1982, distinguish individuals and entities for their outstanding contribution to the development of science and technology in Catalonia. This year, ten researchers from the Catalan knowledge system (six men and four women) have received this distinction and the Institute of Photonic Sciences (ICFO) has received the Narcís Monturiol Plate, which recognizes an institution of the country.

The Catalan Government has awarded a total of 291 Narcís Monturiol Medals (227 men and 64 women), while the institutions awarded the Narcís Monturiol Plaque have been forty-six. Award-winning individuals and institutions span all fields of knowledge, from life and health sciences to humanities and social sciences, through architecture, engineering, and other sciences. Like last year, when the medals were presented to eight women and eleven men, this 2020 continues to advance on the path towards gender balance in the Catalan R&D system, made up of more than 42% women.