Professor Samuel I. Stupp from the Northwestern University, in USA, joined last November 1st the Institute for Bioengineering of Catalonia (IBEC) as a Visiting Severo Ochoa Research Distinguished Professor. Stupp is a pioneer demonstrating how supramolecular biomaterials can be used to regenerate neural, vascular, and musculoskeletal tissues such as the spinal cord, cartilage, bone, blood vessels, or muscles. 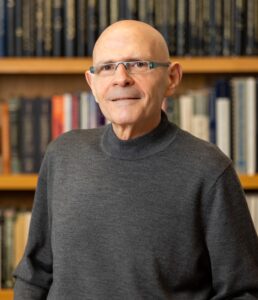 One of the frontiers in science is the design of biomaterials capable of communicating with cells to control their behavior or capable of mimicking characteristics of living matter. Bioactive materials that communicate with cells can offer transformative disease therapies and help regenerate tissues and organs, thus contributing to longer and more functional lifespans for the world population.

Now, one of the pioneers worldwide in the field joints IBEC as a Research Professor. Samuel I. Stupp, Director of Simpson Querrey Institute at the Northwester University,  pioneered the development of supramolecular biomaterials that are bioactive and biomimetic over the past two decades, demonstrating how supramolecular biomaterials can be used to regenerate neural, vascular, and musculoskeletal tissues such as the spinal cord, cartilage, bone, blood vessels, and muscle, among others.

Stupp was born and raised in Costa Rica and came to the United States in 1968 to initiate his undergraduate education. He obtained his B.S. degree in chemistry in 1972 at the University of California at Los Angeles, and his PhD in 1977 in materials science and engineering at Northwestern University. He joined the faculty at Northwestern after graduation in 1977, then moved to the University of Illinois at Urbana-Champaign in 1980, and returned to the Northwestern faculty in 1999 as Board of Trustees Professor of Materials Science and Engineering, Chemistry, Medicine, and Biomedical Engineering. He directs at Northwestern the Simpson Querrey Institute focused on interdisciplinary research and also the Center for Bio-Inspired Energy Science, an Energy Frontiers Research Center funded by the U.S. Department of Energy. Stupp is also a member of the National Academy of Engineering, the American Academy of Arts and Sciences, the Spanish Royal Academy, and the National Academy of Inventors. Samuel Stupp has been Director of IBEC’s Scientific Committee (ISC) since 2013.

Samuel Stupp has received numerous awards over the course of his career, including the Department of Energy Prize in Materials Chemistry, the Humboldt Award for Senior U.S. Scientists, the Materials Research Society Medal Award and the American Chemical Society Award in Polymer Chemistry. In 2020, Stupp was also awarded the 2020 Nanoscience Prize.

I am flattered to accept this position as Visiting Severo Ochoa Distinguished Professor at IBEC, which is a very successful and exciting research institute.

Stupp’s supramolecular biomaterials harness the power of self-assembly among biomolecular structures containing peptides, glycans, and oligonucleotides to create nanoscale fibrils that mimic those formed by proteins in biology in which monomers are non-covalently associated. The nanoscale fibrils and hydrogels formed by these materials offer a unique combination of molecular ordering and dynamics that is extremely effective at signaling cells. These structures are now known in chemistry as supramolecular polymers (Science 2012), and as explained below Stupp was also a pioneer in this broader field. Background to Stupp’s Breakthrough on Supramolecular Biomaterials Going back to the early 1990s Stupp initiated work on 2D supramolecular polymers by using chiral monomers with capacity to self-assemble into highly ordered structures that could react to form 2D covalent polymers (Science 1993).

Stupp published a groundbreaking paper in Science in 2001 that created the field of supramolecular biomaterials. This work reported the discovery of supramolecular polymers that are now known to signal cells in unprecedented ways with enormous potential for use in regenerative medicine.

This work was followed by papers that demonstrated in vivo the capacity of these supramolecular biomaterials to regenerate axons of the injured spinal cord to avoid paralysis, cartilage (a tissue extremely difficult to regenerate in the adult in order to address joint injuries or osteoarthritis), bone in the spine for fusion when disc degeneration occurs, blood vessels for infarction and ischemic arterial disease, and injured muscle. Recent Discoveries in Supramolecular Biomaterials: Surprising Dynamics This past decade Stupp initiated an investigation of the nature of molecular dynamics in the interior of the supramolecular PA filaments as well as the presence of water in the assemblies

The work of Samuel Stupp on supramolecular biomaterials create a long-lasting future for soft materials that will greatly benefit society along multiple fronts.