Probably something very similar happened to the Mayor of Barcelona, Mrs. Ada Colau, who opened this conference organized by IBEC and EMBL in early February. 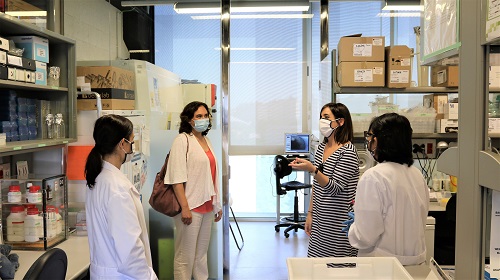 A few months later, the world has changed a lot, but IBEC researchers have not stopped seeking for solutions to health problems, especially for COVID19. That is why last Friday, May 22, the Mayor of Barcelona visited us at IBEC to learn about the progress of our researchers. At the beginning of her visit, the Mayor was able to visit the laboratory of one of the world experts in organoid technology, Research Professor ICREA Núria Montserrat. Núria Montserrat explained how, precisely during the conference in La Pedrera that the Mayor herself inaugurated, she met Austrian researchers with whom she would frantically work to make important discoveries against COVID19. And it is that Dr. Montserrat and her team, a few months ago, have put their “mini-kidneys” at the service of the most cutting-edge research to prove that a drug is capable of blocking the entrance door of SARS-CoV-2 to cells human.

Afterwards, the Mayor met with a group of IBEC volunteers participating in the COVID19 Mass Detection Program Orfeu, among them, Dr. Isabel Oliveira (head of Core Facilities at IBEC), Dr. Maria Gallo and Dr Juanma Fernández. Ada Colau also visited Prof. Josep Samitier’s laboratory to learn about his research in cancer diagnostic systems together with Dr. Clara Alcón. Finally, the delegation visited the IBEC interdisciplinary laboratory of the Junior Group Leader, Dr. Benedetta Bolognesi, to learn about their research in protein mutations and their application to neurodegenerative diseases and aging.

Apart from the scientific visit, the Director of IBEC, Professor Josep Samitier, also explained to the Mayor, one of IBEC’s most special projects: its Magnet alliance with the Gayarre school.