Malaria kills over 500,000 people every year. In the last three years, researchers within the NANOpheles Project worked on the development of nanovectors targeting Plasmodium parasites in the mosquito vector. Xavier Fernàndez-Busquets, coordinator of the EU-funded project, explains their advances in a new video. 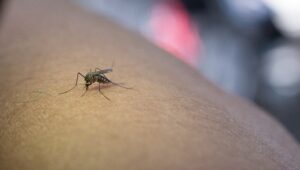 Whereas nanomedical approaches to cure diseases are prevalent in the high-income areas of the world, there is an astonishing lack of nanomedicines to treat the main causes of death in the impoverished areas of the planet: infectious diseases, among which malaria is prominent. In 2020, malaria deaths increased by 12% compared with 2019, to an estimated 627,000.

In the last three years, Fernàndez- Busquets’ Nanomalaria Joint Research Group at IBEC/ISGlobal, together with international partners, have been exploring innovative solutions contributing to eradicate this disease. Within the frame of the EU-funded project, the consortium worked on the development of nanovectors for the targeted delivery in Anopheles mosquitoes of agents blocking the development of Plasmodium parasites.

NANOpheles unites groups which are leading laboratories in nanoparticle synthesis, targeted drug delivery to Plasmodium-infected cells, molecular and cell biology of the pathogen, mouse models and mosquito vectors of malaria, and the clinical aspects of the disease.

The results of the project have provided (i) several nanocarriers specifically targeting Plasmodium stages in the mosquito vector and the insect’s midgut epithelium that the parasite has to cross by a transcellular route, thus representing an ideal target cell for antimalarials, (ii) a novel antimalarial drug belonging to a new chemical family which operates through a previously undescribed mechanism, and which is also active on the mosquito forms of the pathogen, and (iii) a new polymeric nanocarrier capable of enhancing up to a million times the solubility in aqueous medium of lipophilic drugs, of applicability to a wide range of diseases including cancer, metabolopathies and neurological disorders. These project outcomes have led to the filing of two patent applications and a number of scientific publications.

Find out more on this video: