Science invaded Barcelona, and bioengineering was one of the protagonists. Under the slogan “Come closer to science and make it yours!”, the Barcelona City and Science Biennial, an initiative promoted by the Barcelona City Council through the area of Culture, Science, Education and Community, and by the Institute of Culture from Barcelona (ICUB), is organized by a committee of nine commissioners, among whom is the ICREA Research Professor and Group Leader at IBEC, Nuria Montserrat. This year, Professor Montserrat commissioned and participated in more than 20 activities within the framework of the Biennial 2021.

This second edition of the Barcelona City and Science Biennial took place between 8th and 13 June, with more than 250 activities that presented to citizens the last scientific achievements to foster debate and critical opinion. This year, a key concept inspired all the activities: the limits. Limits in a very broad sense that served to determine the course of the transversal themes of the Biennial. In this way, disciplines as relevant as bioengineering or regenerative medicine, and issues that mark the boundaries of current science, have direct implications on these limits, and were discussed in various activities.

In the round table on “Synthetic Biology and Engineering to Generate Living Systems“, Professor Montserrat, together with international experts Michael Levin, and Ron Weiss, a pioneer of MIT’s synthetic biology, discussed the limits and possibilities of the engineering of living systems. They have become increasingly tangible, making it possible to modify cells and cellular circuits that give rise to a new revolution where we can deal with previously intractable diseases, or create biorobots designed on demand. 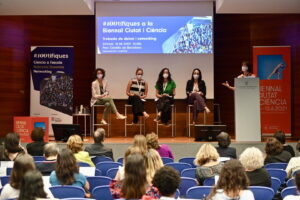 Professor Montserrat also moderated a round table with the participation of Anke Kleff, Senior HR Development Officer at IBEC, on “Let’s spread the influence of women in science,” within a new “100tifiques” meeting, also within the framework of the Barcelona City and Science Biennial promoted by the Barcelona City Council. The Mayor of Barcelona was also present in this event and could enjoy the first IBBI comic, the bioengineering superheroine.

Among other activities, Dr. Montserrat was also involved in a dialogue entitled “Forging our Future” with Ernesto Kahan, Nobel Peace Prize winner, Rosalia Arteaga Serrano, and Claudia Arteaga Serrano, about the unique capacity of science to transform our society. One example: we have seen, now more than ever, how international scientific collaborations have defied the future of our species during this pandemic. At the same time, history was a subject of this discussion, as it teaches us that we are more effective and relevant if we empower people to support the scientific and social transformation that we all together aspire to.

“We want the city to merge its cultural and scientific views, to promote citizen participation and debate on research and to strengthen the presence of women in the world of science”.

Nuria Montserrat, Biennial Commissioner and principal researcher of the Pluripotency for organ regeneration group at IBEC. 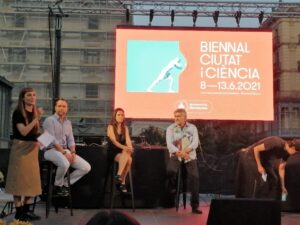 Other IBEC experts also participated in the activities scheduled for this year: Samuel Sánchez, ICREA Research Professor and leader of the “Smart Nano-bio-devices” group, did so in the “Pecha Kucha Express: Art, Science, Technology“. Finally, IBEC researcher Giulia Fornabaio moderated two session talks, one on the solar system and the other on “Perception, Art and Science“.

As the closing event of that year’s edition, the 14th edition of the Science Festival was held on Sunday 13th June, in a new space on the maritime front with workshops, experiments, demonstrations, short talks, itineraries, visits, games and shows. The Science Festival is the result of the joint work of universities, research centres, other scientific institutions, and companies and professionals devoted to scientific dissemination. They formed with their proposals the programme which this year counted with 121 activities, 187 participants and 95 institutions.